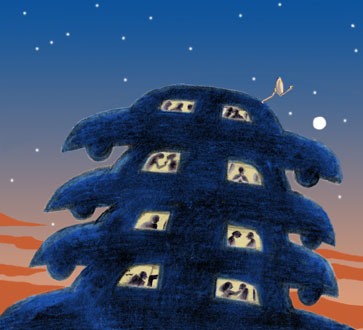 I carried my yellow lace curtains from Zellers and the half-bottle of Windex across the road to my new Toyota Sienna CE. Behind me, among the other cars at my old address, stacked and spread proportionately, was my Volvo V40. I was finally leaving it behind.

Moving up in the world.

Surrounding the Toyota Sienna CE were a Honda CRV and Odyssey, a Dodge Caravan, a Toyota Pathfinder and an Acura MDX. A Jeep GR Cherokee Laredo 4X4 was solidly welded atop a Chrysler Town & Country Limited “Swivel & Go.” A giant white BMW X5, Drive48Ii sat by itself near the rear of the lot, a tribute to the scale of luxury of the condo residents.

My new digs was near the top of the line. No more Civics, Mazda 3s, Echos, Focuses, Vibes for neighbours. Finally, some room to stretch.

I stared back at my old condo site. All compacts or sedans. All of them had seen better days.

So had we all.

Zucroff was standing by my old Volvo V40, his hand on the open door, admiring. Thinking about his luck. He’d gotten a good price. I’d been anxious to sell. He waved to me. I waved back, then turned to savour my new surroundings.

Moving up was all relative.

The door of the white BMW opened and a stout man with a bolo tie emerged, put on sunglasses, walked toward me, held out his hand. “Jim Butterfield.”

I took his hand. “Phil Tilly.”

“You got your self a nice place there, Phil. Nice little unit for setting up house. Merriweather took good care of it.” He removed his sunglasses, held them at his side. His eyes dropped. “Too bad about all that.”

We both turned to stare at the Toyota Sienna CE.

“I’m president of the Laird Condo Association. We’ve got some bylaws, all sensible, modest monthly maintenance fee – which I’m sure you know all about — and we see ourselves as a nice little community. We’re happy to have you with us.” His smile was genuine. “Where you working?” He glanced up and down the street, knowing it couldn’t be far.

He shook his head knowingly, then nodded. “My place,” he looked toward his BMW, “used to turn 350 hp. Guy who bought it originally, some twenty years ago, paid ’bout a hundred grand for it.”

“Worth a lot more’n that now,” I said. The rubber wheels were gone. It was cemented to the pavement.

He was silent in agreement. “Not many of them left.”

He looked across the street at the sedans, hatchbacks, coupes, up the street at the horse carts and wagons. “That I am,” he said. Then he came back from his brief reverie. “Wanted to officially welcome you to Laird Estates.”

“I appreciate it, Mr. Butterfield.”

“Jim.” I glanced at my new pride and joy.

He followed my gaze, his own eyes crinkled. “I guess you want to get settled.”

I held up my curtains, my bottle of Windex.

“Have a great day.” He put his sunglasses back on, headed back to his BMW X5 Drive48i.

As I headed across the condo lot, an arm waved to me from the passenger window of the top-tiered Jeep Cherokee, crowning the Chrysler Town and Country. I waved back.

I opened the door of my own, new Toyota Sienna CE. My heart leapt. The yellow lace curtains would be perfect. Maybe some hollyhocks, some roses around the rear bumper. We’d had them in my backyard when I was a kid.

Moving up was all relative.